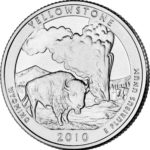 The 50 State Quarters program released a series of circulating commemorative coins from 1999 through 2008 which featured each of the 50 U.S. states on unique designs for the reverse of the quarter.  The State Quarters program was started to support a new generation of coin collectors, and it became the most successful numismatic program in history, with roughly half of the U.S. population collecting the coins, either in a casual manner or as a serious pursuit.

The National Park Quarters are a series of quarters issued from 2010 until at least 2021. The series may be extended at the option of the Secretary of the Treasury, potentially extending the series to 2033.  The obverse of all the coins will depict George Washington in a restored version of the original portrait used for the 1932 Washington Quarter. There will be five new reverse designs each year (one in 2021) each depicting a national park or national site (one from each state, the federal district, and each territory).

History of the State Quarters and National Park Quarters (continued)

The 50 state quarters were released by the US Mint every ten weeks, or five each year. They were released in the same order that the states ratified the Constitution. Each quarter’s reverse commemorated one of the 50 states with a design emblematic of its unique history, traditions and symbols. Certain design elements, such as state flags, images of living persons, and head-and-shoulder images of deceased persons were prohibited.  By the end of 2008, all of the original 50 states quarters had been minted and released.

The authorizing legislation and Mint procedures gave states a substantial role and considerable discretion in determining the design that would represent their state. The majority of states followed a process by which the governor solicited the state’s citizens to submit design concepts and appointed an advisory group to oversee the process. Governors submitted three to five finalist design concepts to the secretary of treasury for approval. Approved designs were returned to the states for selection of a final design.

States usually employed one of two approaches in making this selection. In 33 states, the governor selected the final recommended design, often based on the recommendations of advisory groups and citizens. In the other 17 states, citizens selected the final design through online, telephone, mail or other public votes. The State Quarters Program was the most popular commemorative coin program in United States history; the United States Mint has estimated that 147 million Americans have collected state quarters.

National Park Quarters will be issued depicting designs of national parks and sites in the order of which that park or site was deemed a national site. The quarters from three different states will depict parks or sites that were previously portrayed on the state quarters (Grand Canyon in Arizona, Yosemite in California, and Mount Rushmore in South Dakota). Though they will depict the same sites, they bear new designs.

What are my State Quarters worth? (courtesy of about.com)

Despite each coin in the State Quarters series being minted in the hundreds of millions of coins, the venerable Statehood Quarters program is one of the most widely collected coin series in history. read more »

Customers of the U.S. Mint have frequently complained that they do not have enough notice about upcoming U.S. Mint products. This year, in particular, there were several months when virtually no information.. read more »