History of the Dime (courtesy of Wikipedia)  The Mercury dime is a ten-cent coin struck by the United States Mint from late 1916 to 1945. Designed by Adolph Weinman and also referred to as the Winged Liberty Head dime, it gained its common name as the obverse depiction of a young Liberty, identifiable by her winged Phrygian cap, was confused with the Roman god Mercury. Weinman is believed to have used Elsie Stevens, the wife of lawyer and poet Wallace Stevens, as a model. 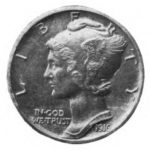 The coin’s reverse depicts a fasces, symbolizing unity and strength, and an olive branch, signifying peace.

We carry air tight coin capsules for long term preservation, as well as coin cases and albums designed for Mercury Dimes (as well as Roosevelt Dimes which are the same size):

History of the Dime’s lineage

The Mercury dime was released into circulation on October 30, 1916, the same day that production of the Barber dime ceased.  Several newspapers complained that Weinman’s monogram was too prominent on the obverse; according to The New York Times, the Treasury was considering removal.  On November 4, Weinman enquired of Joyce whether any removal was contemplated; he received in reply compliments on his design and Joyce’s statement that the Mint was not responsible for what appeared in print. Weinman wrote again, hoping to make changes to the dime, but was told that only an act of Congress could change the design.

Of the three circulating coins first struck in 1916, the Mercury dime was particularly praised. On the first day of circulation, quantities sold were limited at banks. One Minneapolis newspaper dubbed it the “battle ax” or “golf” dime, reflecting a lack of knowledge concerning the fasces. A letter to the editor in the January 1917 The Numismatist appears to be the first numismatic reference to the coin by the nickname “Mercury”.  Lange traced the history of this misnomer,

This misattribution appeared almost immediately in the popular press, as writers imagined that the obviously female Liberty was actually a representation of Mercury, messenger to the Roman gods of mythology and quite certainly a male. It is popularly known as the Mercury Dime even today, despite noble but ill-fated attempts by some publications to reverse this error.

Chief Engraver Barber died on February 18, 1917, having served 37 years in office. His successor was the 72-year-old Morgan, who had served under Barber for his entire tenure.

The dime was struck in substantial numbers until 1930, with the notable exception of the 1916-D issue and from 1921 to 1923, when an economic downturn caused the need for coins to diminish. No dimes were struck for 1922, the first time since 1826 that this had occurred. With the onset of the Great Depression, mintages dropped again in 1930 and 1931; coinage of dimes was suspended entirely in 1932 and 1933. The low-mintage dates are not rare today as many were hoarded, and 1930- and 1931-dated dimes proved readily available from the banks once the economy improved. With the economy beginning to pick up again, coinage resumed in 1934, and the dime was struck in large numbers each year through the end of the series.

The death of President Franklin Roosevelt in April 1945 brought immediate calls for a coin to be issued with his image. As Roosevelt had been closely associated with the March of Dimes, and as the dime’s design could be replaced without the need for congressional action as it had been struck for more than 25 years, the Treasury chose that denomination to honor Roosevelt. Mint Chief Engraver John R. Sinnock, Morgan’s successor, executed the design featuring Roosevelt, which replaced the Mercury dime in 1946, making 1945 the last year in which it was produced. According to Mint Director Nellie Tayloe Ross, a total of 2,677,232,488 Mercury dimes were struck.