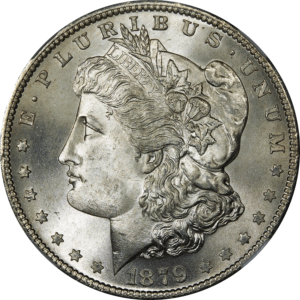 It was the first standard silver dollar minted since production of the previous design, the Seated Liberty dollar, ceased due to the passage of the Coinage Act of 1873, which also ended the free coining of silver. The coin is named for its designer, United States Mint Assistant Engraver George T. Morgan. The obverse depicts a profile portrait representing Liberty, while the reverse depicts an eagle with wings outstretched.

The dollar was authorized by the Bland–Allison Act. Following the passage of the 1873 act, mining interests lobbied to restore free silver, which would require the Mint to accept all silver presented to it and return it, struck into coin. Instead, the Bland–Allison Act was passed, which required the Treasury to purchase between two and four million dollars’ worth of silver at market value to be coined into dollars each month. In 1890, the Bland–Allison Act was repealed by the Sherman Silver Purchase Act, which required the Treasury to purchase 4,500,000 troy ounces (140,000 kg) of silver each month, but only required further silver dollar production for one year. This act, in turn, was repealed in 1893.

Morgan Dollars were produced at five different mints: Philadelphia (no mint mark), Carson City Nevada (CC), New Orleans (O), Denver (D) and San Francisco (S).  Not all coins were produced at all mints in all years.

In 1898, Congress approved a bill that required all remaining bullion purchased under the Sherman Silver Purchase Act to be coined into silver dollars. When those silver reserves were depleted in 1904, the Mint ceased to strike the Morgan dollar. The Pittman Act, passed in 1918, authorized the melting and recoining of millions of silver dollars. Pursuant to the act, Morgan dollars resumed mintage for one year in 1921. The design was then replaced by the Peace Dollar later the same year which was minted from 1921 to 1928, and again in 1934 and 1935.  Then the US Mint ceased to issue one dollar coins until the Eisenhower Dollar was issued from 1971 to 1978.

This table will give you an estimate the value of your Morgan silver dollar coins.  The table provides average coin values and prices based upon the condition of the coin.  If the coin shows evidence of wear on it due to being used in commerce, it considered “circulated.” If it was never used, then it is classified as “uncirculated.”

Numismatic Guaranty Corporation® (NGC®) has announced that its comprehensive guarantee of grade and authenticity has been expanded to cover GSA Hoard Morgan Dollars that have been graded by NGC in their original black GSA holders. This update… read more »

Steve Estes is a Portland, Oregon coin dealer and a professional numismatist who has been in business since 1963. He and his wife, Debbi, sell primarily PCGS and NGC-certified… read more »

The Morgan silver dollar, minted between 1878 and 1921, has no real peer in the numismatic world. It is by far the most widely collected and traded numismatic coin in the world. Attend any coin show and you will quickly see that… read more »

First published in the March 7, 2011, Special Edition of Coin World The Morgan dollar is widely traded at all levels, from the top-grade rarities that sell in the high-six figures for investment… read more »